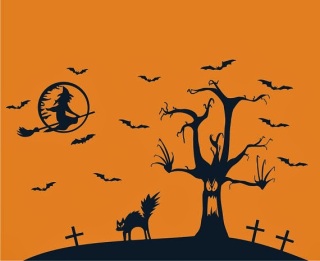 This is my belated Halloween party recap. Then I will get to my belated SCONY weekend recap! This past month has been busy, busy, busy and there have been parties left and right. Last weekend was the annual Halloween party/fundraiser for the Wasatch Academy for the Refinement of Ladies and Gentleman of Leather and co-hosted by NLA-U. I wish I’d taken some pics before all the people arrived because the house looked fabulous. The decorations were great as was the food, as always.

I helped at the door for check-ins for the first part of the party until S and I went downstairs to find some room to play before it got really packed. I kneeled on the spanking bench and he moved my skirt out of the way. (Met the 10 second rule.) He’d left his toy bag upstairs so his hand got a good workout. He gave me a long warmup before spanking me much harder with his hand. It was stingy and had me squirming already. His hand has really gotten harder since we first met. Guess that’s what happens when you’re regularly seeing a spanko, huh? I’ve created a monster!

After a while I think his hand got tired and I heard him unbuckle his belt. Ah, that sound… I glanced back at him as he pulled it through the loops and removed it. It struck my bottom several times as he built up the intensity. I was struggling to keep my hands down on the other side of the bench as I twisted from side to side. It was really stinging and I wasn’t so quiet at that point. He gave me a few more strokes and then stopped and rubbed my bottom. I got up and gave him a hug and then returned upstairs. 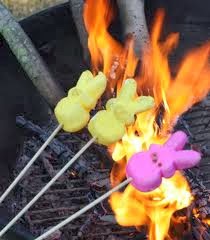 There were a lot of people who had arrived already and many interesting costumes. I actually went as my friend L because I thought that would be funny but not everyone was getting it. And I was accused of not showing enough cleavage. Oh well, you can’t please everyone. I spent quite a bit of time outside throughout the night to take a break from the crowd. J had a fire built and started it for me so I could roast my Peeps. Thank you, J! Because that’s a completely normal thing to do at a play party, right? I’m happy when people humor me (some may say enable) and that really made my night and kept me preoccupied. 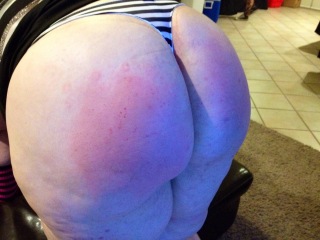 A few folks tried a roasted Peep for the first time and they ALL agreed it was pretty good. Why don’t people believe me to begin with? Some refused to try but I won’t give up on educating the world about the deliciousness that is the Peep. There was a TSA agent roaming about the party who frisked me and gave me a spanking. We caught up with each other at the end of the night before he was leaving and had a sort of reverse intensity scene. I bent over a nearby ottoman and he spanked me with a wooden paddle he had. That elicited a quick verbal response from me and after some more swats with that he switched to using his hand. That was not much lighter than the wood but I don’t think I pointed that out at the moment. My bottom was reddened up so mission accomplished. This pic was taken after. That was the end of my adventures for the night. Thanks to all who made it a great party!

I'm a shy bottom with a sharp wit. :-)
View all posts by Lea →
This entry was posted in Peeps, real life spankings, Utah scene. Bookmark the permalink.