On Saturday night I attended the NLA-U play party. The theme was “Queen of Hearts.” But I had my own theme in mind. You see, it was Justin Timberlake’s birthday that same day. Certainly something worth celebrating! Other people were sadly unaware of this except for those who didn’t tune me out for the past week. But that’s okay. I knew and I had a plan. A Justin Timberlake scene would be happening.

I started thinking of a playlist to fit the mood. It would have to be a mix of JT songs with some ‘N Sync throwbacks for good measure. I wanted to have each album represented but I did leave out “Home For Christmas” since it didn’t really fit. No offense, Christmas album. I still treasure you. I thought of warm up, more upbeat stuff for the middle, and then cool down to end things. This was the final list for anyone who wishes to replicate such a magnificent scene.

I emailed S the playlist. He was able to find all the songs except for “Dress On” which is apparently an exclusive on the version of the album that was sold at Target. Music was in order. Now my mind went to wardrobe. I had a new dress to wear that was above the knee and dark blue with faux leather piping down the sides. But how would I show this was a JT scene? I had the idea to make the letters JT out of duct tape and put them on the back of my panties. You can see the end result on the right. Now I was ready. Music. Check. Wardrobe. Check. Sort-of-willing-top. Check.

I arrived at the party about the same time as S. Since we were going to be somewhat disruptive with our own music I wanted to find a space that was out of the way of the crowd. Because I’m fucking courteous like that. I do realize there are some poor souls who do not appreciate the music of JT. I can’t fix all that is wrong with the world. The party was packed and every play space was taken right from the beginning. We waited and were able to snag an open massage table in a side room and get set up. 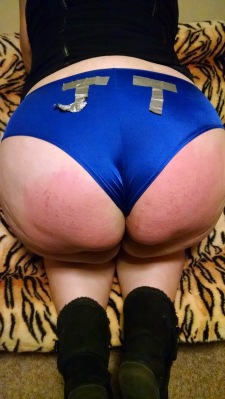 I laid down on the table and pulled my dress up. S set out things from his toy bag, got the playlist started on his phone, and playing through his portable speaker. We were immediately surrounded by JT’s sexy voice. He started spanking me with his hand to warm me up. Though he has a tough hand these days so that is not always easier to take than some of the implements. My skin felt cold at the beginning which made each swat stingier. He cycled through his tawse and some straps. I occasionally moved from side to side to the beat of the music besides my normal squirming.
Parties tend to always play shitty industrial music in the background so my playlist did catch some attention from passersby. People would poke their heads in and watch for a moment and then go on their way. When “Dick In A Box” started I heard some laughter. That’s always a crowd favorite. S continued with some other items from his bag, checking that I was still doing alright. Towards the end I counted out loud a final 34 swats with his hand as JT’s birthday proxy. We didn’t make it all the way through the playlist but it was a successful scene.
The above picture was the end result. My J got mussed up a bit from the dress being pulled up and down. I was left with a big smile and a nicely reddened backside. Thank you to S for playing along. Even though he refused to sing along. Pfft. I even got 2 more spankings that night. One was as a proxy for an attendee’s birthday. And the other was with someone I had been looking forward to playing with for the first time. All went well and I had a lot of fun at the party. My bottom ended up even more colorful but unfortunately I didn’t get a pic at the end of the night. I’m sure this scene will live in infamy as nobody else has done such a thing.
*Author’s note- Yes, I know that I am a ridiculous person and I appreciate everyone who humors me.*

I'm a shy bottom with a sharp wit. :-)
View all posts by Lea →
This entry was posted in humor, music, real life spankings, Utah scene. Bookmark the permalink.

3 Responses to The Justin Timberlake Scene