﻿﻿﻿
At the recent SCONY weekend, I had many new experiences. One of those that I’d like to share here was being spanked alongside another bottom. This was something my mind had grappled with in the past. Normally I’m very private with my scenes. So private I blog about it. Lol. Seriously though, I’m extremely self conscious and the idea of public spanking and people watching me gives me major anxiety. It’s not even about staying fully clothed in public or anything like that, just the overall idea of it happening freaks me out. A scene involving a few other people isn’t exactly “public spanking” of course, but still something that I generally avoided. I have been spanked by two tops at once, and that was a good experience, so I won’t say never. But I had never had another bottom involved in the scene.

My spanking world has evolved since the beginning and this time around I was quite curious about having a group scene and decided to go for it. Fortunately, I was able to play out that scenario with two people I feel very comfortable with. Saying it was “fun” isn’t quite the term I want to use, because my backside certainly wasn’t having fun by the end of it. But for lack of a better term, yeah.. it was fun. 🙂 The top, Mr. C, certainly had his hands full. Pun intended. First, we locked him out of the room and Tricia and I laughed hysterically at his attempts to get in. After getting sick of hearing him banging on the door and hallway wall and not wanting to disturb all the occupants of the building (because I’m courteous like that), I opened the door to let him in. Bad move. Mr. C came flying through the door with his bag of implements and was not laughing along with us. Tops, where’s their sense of humor you know? They take everything so seriously…

Mr. C didn’t really appreciate our giggling at him. I had quickly retreated to the opposite side of the room after letting him in, so poor Tricia was in closer range. He gave her several swats and asked her if she still thought it was funny. She did… Lol. What did you expect? When bottoms get together it just increases the energy. You think we’ll go down easy? Never. Now aside from not participating in public spanking myself, I’ve never really been comfortable watching someone else get spanked. So this again was an all around new experience. As Mr. C was spanking Tricia, I just sort of stood there in awe and wasn’t sure where to be looking. Then he looked at me and said, “You’re next.” 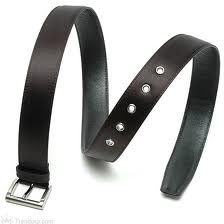 I wasn’t sure how I was going to react in a group situation. Normally when I’m spanked I get really reserved and quiet, to the point where the top may wonder if I’m okay because I’m not easy to read. The dynamics with these two though, really let me play out that bratty role a bit. I was certainly more vocal than normal. Mr. C started spanking me with his hand and scolded me for letting Tricia be a bad influence on me. He asked if I was going to keep hanging out with her and I said yes. He asked me why as he spanked me harder. “Because I like her, she’s fun,” I giggled. That made her laugh too and you can imagine how that went. He crossed back over to her and delivered several hard swats that had me cringing before coming back to me.

He had me lay out on the bed next to Tricia which made it so I couldn’t see which implement he was grabbing next. I hate that. Hearing the spanking and her reactions to it first all the more increased that deliciously awful feeling of anticipation for me. He spanked me with some awful wooden thing, which I later found out was a backscratcher. Omg, did that little thing have an impact. That one had my legs really kicking. Mr. C pointed out that we weren’t laughing anymore. No, we weren’t. Once wood enters the picture any giggling is long gone, that’s for sure. Mr. C told us that we were both going to get a strapping. <insert sinking feeling in my stomach here> I had experienced this the day before and was not looking forward to it again. Tricia got it first as I braced myself. Then he gave me several smacks with the belt. He asked us if we’d learned our lesson and a chorus of “yes sir’s” was the quick reply. We were ordered to stand in the corner for a few minutes before things ended with a hug and I was sent to bed.

So that was that. I’d certainly be open to doing a group scene again, with the right people. After all, Tricia and I now have to get our revenge on Mr. C so the opportunity will probably present itself. >:) Hehe. Thank you to those involved for allowing me to share this experience and thank you for reading.

I'm a shy bottom with a sharp wit. :-)
View all posts by Lea →
This entry was posted in real life spankings, SCONY. Bookmark the permalink.